Knowing that we will be getting 6 new calves, we decided to plan a calf
barn.  We are putting it in the middle of the pasture for multiple
uses.  Our initial plan is three stalls, one large area to store hay,
and one kitchen area with sink to clean and store equipment.  Our plan
is to use the idea from Mulligan’s Run here.  So we have purchased a metal 18 x 21 carport.  This was installed by Twin Carports.
They arrived at 7:45 am, had the right equipment to install without
electrical, helped me orient the carport properly and were finished
shortly after 9 a.m.  They did a great job, and had a great sense of
humor as seen in the above photo of my carport and the crew.

We decided we wanted natural light in our barn, so we added clear
corrugated roofing for windows on the sides.  The area between the metal
posts is about 20 feet, so we bought 5 panels, using two that are whole
and one that is cut down the middle (I used ordinary scissors to cut
it.)  In order to have support for the windows, we put a row of wood at
top, and added two side supports in the middle by kreg jigging holes to
the top and bottom of the boards and fastening on the inside of the barn
with pocket screws.  We used 1″ self -tapping roofing screws to put in
the windows, due to the washers they have on them.  We had bought
self-tapping 1 1/2″ screws to attach the 10′ boards to the metal carport
supports, which we counter-sunk to make the heads even with the boards
(or close to it).  It really didn’t take that much time with two people
working on it (my husband and me).  It’s funny that we started working
about 9 am and decided we needed better tools, so we left to go buy new
drill bits and a generator so we could power regular drills (it was
draining the batteries of our cordless drills quickly to drill into
those metal supports.)  We had wanted a generator anyway with our off
grid system and the upcoming wedding reception being so far from the
house, so the timing was right.  We didn’t really get back to work until
about 2:00 in the afternoon, so the work done on the sides was
accomplished in about 6 hours, with two of us working.  The boards in
10′ lengths were about perfect.  There are only a couple we will have to
trim at the corners.  We let them hang over about an inch so they will
meet the front and back boards.  Next weekend, we are planning to drill
the holes for the interior posts, put cement in to set, and then put up
the posts.

We took about 4 hours to put in some posts this past weekend, and a short time the
previous weekend putting in cement to dry.  I felt that I needed to
show details on this step, as it doesn’t seem to be in the progress
pictures of the Mulligan’s Run barn that
this is patterned after.  I did get a helpful email from the owner,
however, to give me a direction to go in.  We used the 12″ auger on our
tractor to dig some holes that are 12″ deep.  We then mixed concrete and
poured it into the holes (seven holes in all).  Despite having it
blocked off, the Black Angus steer that we have in that pasture managed
to get into it as it was getting close to being cured and put their
hooves in.  As we were keeping a check on it, we managed to step in with
our muck boots on and re-flatten it while it was still malleable.  They
did not mess them up again, thank goodness.

Once the concrete dried (we waited until the next weekend), We then
worked on the posts to be fitted to the top by first putting the 4 x 4
up on the outside of the carport with it’s base on the outside of the
concrete, leveling it in one direction, and drawing a line at the
carport roofline.  Since our roof is corrugated, we then made a second
line 1/2″ down, and cut on that line.  Once that was done, we put the
post up where it was to go, leveled it, and drew a line where we wanted
to notch it out about 2″ so it would fit snugly on the metal carport
supports.  My husband used a circular saw, cut the line, and then cut a
line about every 1/8″ so he could then hit it with a hammer and get the
rest out with a chisel.  Once we got that fitted and leveled, we drew a
line straight down in the middle of the metal support and the middle of
the 4 x 4 post, as well as drew around the bottom of the 4 x 4 onto the
concrete (so we could line them up again), and took down the post.  We
then position the post base in the square we had drawn, and using a
spike, tapped it where the of the post base was to mark it.

We removed the base and used a hammer drill to make the 1/2″ hole for
the redhead sleeve in the concrete.  We used a piece of tube and our air
compressor to blow the extra dust out of the hole so we would get a
good fit. We put down the post base and hammered in the redhead, then
tightened it with a socket and driver to secure it in the concrete.  We
then put the post in and drilled two holes through the top and into the
metal carport supports so we could use a carriage bolt to secure the two
pieces together.  We put the post bases so that the sides went to the
sides and not towards the front of the barn where we would be putting
wood.  We also secured them to the posts with joist hangers.  Then we
repeated this procedure with the other outside posts.

We got the last outside post put
up, then started with the back wall.  This time, we ran out of wood
screws and had to stop.  I love the way my husband took a small amount
out of the 4 x 4s and wedged in the header for the door.  Of course, we
also toe-nailed that in.

As work on the calf barn continues slowly, we have had to make a few temporary adjustments.  We bought a gate to stand up at one end and used a board on the other side as sort of a creeper barrier (thanks Linda for the idea) to allow the calves in and keep the older ones out so they don’t push the younger calves off of their feed buckets.  As you can see by the picture on the right, one of the calves graciously agreed to model how it works.  So far, so good.

As we are planning for the finished calf barn to have three stalls, a kitchen area and hay storage, I have been watching out for a sink with big drainboards to put in the barn.  Thankfully our neighbors (thanks John and Karen!) were pulling one out from one of their buildings, so that worked out well.  Currently it is just sitting in the barn until we get the opportunity to run water out there.  We are trying to figure out what we are going to use in that area to level it and provide a better flooring, and are considering sand and stepping stones.

My husband specially made a support piece for the door. It was made out of a 4 x 4 with chiseled out parts to fit just right.

We just put a 2 x 4 support piece to set it on and toenailed it in.

We made the door down in the basement, and we put it up today. We transported it out to the pasture on the forks of the tractor (my husband is a genius.)  It looks so nice on the barn!

Update:  We realized that we needed some light for nights when the days are short, so we added some dc led lights that we attached to a battery and a trickle charger.  For the switch, we used a spring wound timer, so we could set the light on about ten minutes and give the calves time to see their food.  It is great as we don’t have to come back and shut off the light!  For the battery, we used a riding lawn mower battery, as it was cheaper. 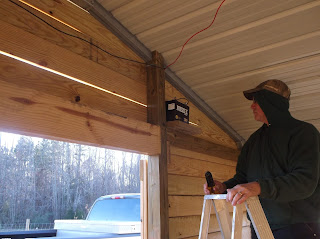 So now I finally have my little red barn with white trim.  I stained it with two coats of Cabot Gold oil stain in Fireside Cherry, and painted the trim white.  Surprisingly, it only took two gallons of stain.  You can really tell how well the water beads up now, so it did a good job of sealing it. 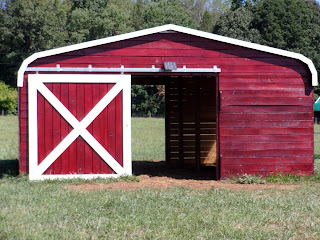 3/22/2018 – Carport Barn Phase II
Today we had Twin Carports come back and bring us another carport so we can extend the barn for hay storage.  Here is the beginning of the second half of the carport barn. 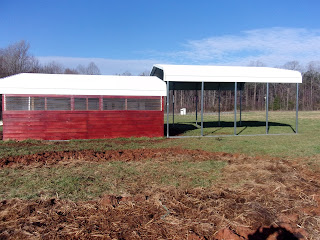 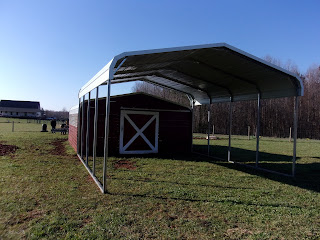 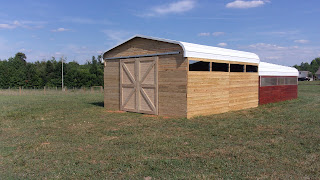 Waiting for the treated lumber to dry out for about 30 days so we can stain it to match the other half. 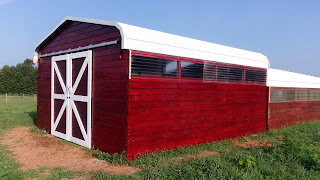