Christmas Postcard. So I have a pet peeve about receiving a Christmas card from someone you haven’t heard from in a year and it doesn’t say anything other than Merry Christmas! However, it seems so difficult to write someone a special note, that I haven’t sent Christmas cards for a couple of years. For a while, I was sending an annual Christmas letter instead of a card. This year I think I stumbled on the cheapest and best. The first thing I did was go onto the US Postal Service’s website and view the requirements for postcards here. I found that a 4 x 6 picture was the perfect size. In order to get a picture that was Christmas and not copyrighted, I took a picture of the wreath on my front door. I then pulled it into Word and added a textbox full of what I wanted to say about the family. Unfortunately, Word would not allow me to save it as a jpg file once it had a textbox on it, so I did a Print Screen and copied it into Paint, cropped it, and uploaded it to Walgreens, where they were having a sale that if I bought 50 prints, I could get them for $.12 each. I really only wanted 25 prints, but if I ordered less than 50, they were 29 cents each, so it was cheaper to order 50. I bought the $.34 postcard stamps, addressed them and sent them out. The Walgreens in my area had one hour photo making, so this was all accomplished in an afternoon. Yay! Here’s a picture of the finished product: 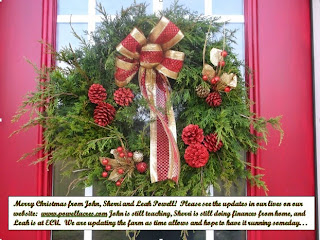 How to Launch a Duck House Without Getting Wet