Adventures in milking.  We just got our Jersey cow, Sage and her calf (we named him Brownie) on 12/1/2018 and this is the first time we have had any dairy animal.  The first night, we put the two in a stall with some grain and water and let them out in the morning, as we felt they had been through enough stress with the move.  That also gave us time to finish the milking stanchion and other modifications to the barn.  Then on the evening of 12/2, I went out to try to get the calf into a stall in the barn.  Mom was not happy that I was after her calf and showed her displeasure by pooping.  So I changed my tact and decided to put mom in the stall (I had left on the rope halters tied short.)  Pulling on the halter did not do well, so I decided to try to lure her with a bucket of grain.  That worked.  I put Mom in the stall that I had prepared for the calf, thinking I would bring in the calf and add it, then let mom out.  Alas, the stall was too small.  So when I brought in the calf, it ended up going in the milking parlor, then I let Sage out of the stall so she could wander around the pasture and get to the two hole waterer.  However, since I achieved my objective of getting the calf separated from mom, I counted myself a success.

This morning I prepared to be out at 7:30 (after I got my husband out the door with his lunch and breakfast).  While my dairy supplies have not arrived yet, I wanted to get in at least a token milking so mom could get used to me.   I put together supplies that I had to get the routine started.  I washed a bucket we had for the other cattle to wash her up with a small amount of mild soap and hot water knowing it would cool on the way out.  I got out my brush, and I had a stainless steel bucket and found a shower cap we had gotten from a motel to cover it to keep debris out.  (I wonder what year that was from?  Definitely prior to starting this homestead. . .)  I even prepared my milk filter with a wide mouth funnel and a strainer to filter the milk, since I read to do that before milking in the Keeping a family cow book.

As I was walking through our yard, which happens to have our Brown Swiss Cattle in it due to being the only place right now with good grass that is separate from the new cow, I realized I had made my first mistake.  I was so focused on my first milking, that I didn’t realize until the cattle started following me that I was walking past them with two buckets in my hands.  I managed to escape through the gate before I got trampled.  Whew!!

I lured her into the milking parlor with a bucket of grain.  When she got in, I poured it into the manger attached to the stanchion, thinking she would get in position and start eating the grain and I would closed the stanchion.  Sadly, I had not thought ahead to close the stall gate.  Sage wisely went right back out of the gate where she could get to the grain in the manger on the other side of the stall.  Oh my goodness, I am having a good lesson in what not to do.  Still, I tried to use what I had and while she was eating the grain, I brushed her, I washed her udder, and I was able to get my hands on her teats to do a cough, cough, token milking.  You will know what I mean by the picture of the bucket. 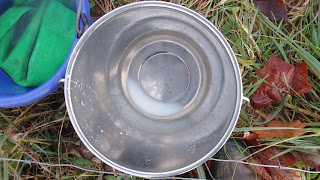 Nevertheless, progress was made and I am determined to do better.    At least I can laugh at myself. . .