It seems like I haven’t written in a while (which is true).  We have been so busy doing things for our daughter’s wedding here at the farm.  However, that included finishing up projects here at the farm, so the farm could look good, as well as retain functionality.  For example, we finally have a two car parking pad so we don’t have to drag in mud, which in turn releases us from doing that kind of clean up work and allows us more time on the farm.  At the same time, we put in a turn out which has been quite helpful for turning around the truck and tractor.  We also finished up the handrail on the back deck which was a safety issue, as well as finished the calf barn and put on the doors.  Additionally, we had to stop and get a feed bunk for the large steer, as their dancing around us while we were holding the small buckets was putting our feet in danger of getting stepped on.  Another small project was when my husband took an existing barrel and cut it in two to make a feed bunk for the smaller calves. 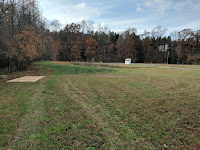 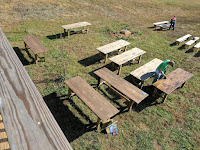 We ended up having to build a dance floor (which did not get used due to the cold temperature on the wedding day.  However, we put it together in such a way to leave most of the materials a full 8 foot dimension so we can use the lumber elsewhere (such as the flooring on the apartment that will eventually house farm help.)  The tables and benches were put together with two by twelves and two by tens, which we are already planning another outbuilding for the growing area to house tools where we need them.  Nothing will go to waste if we can help it.  It made more economic sense to us to buy the equipment and/or lumber for about the same price as the rental, and have something we could sell or use at the end.

The Black Angus steer and the Brown Swiss calves have sure grown.  We have an appointment for one of our steer to go to the packing plant on December 26th.  Prior to that, we have got to find a trailer. . .

Don’t forget to flip over to the wedding tab “One Wedding to Rule Them All,” scroll to the bottom of the page and hit the link (the word here), to get to the wedding pictures.