Christmas decorations/Apparel/last of leftovers.So it was time to remove the remaining Thanksgiving decorations and put up Christmas. While we have lived at the farm for two previous Christmas holidays, we were so busy doing other things that we were using leftovers from our last house and trying to make them fit the farm. While most of them were OK, the farm needed some decorations that fit the farm. I started with what I had, of course. So, a friend and neighbor gave me a wood sleigh which I wanted to turn into a centerpiece. Not in the middle of the table, mind you (I hate those tall centerpieces in the middle of the table that you can’t see over when you are trying to talk to someone, don’t you?) No, I have a buffet down at the end of the table with a mirror hanging over it which is a great place for the centerpiece. I will use it there when we get closer to Christmas and my leftover flower arrangement from Thanksgiving gives out (I am really trying to root some of the greenery from the Thanksgiving arrangement that my new niece brought.) For now it is on the buffet. I started with an unfinished wood sleigh, used Pinterest to gather ideas, and combined a few sleighs that I liked with a hurricane lamp to get my final piece.

I also need a wreath for my front door. I like real greenery, so I looked for a ready made wreath, but they all seemed either ugly this year or too expensive, so I took out my old wreath from last year that was hanging in the shed looking dead, took off the ribbon and decorations that had come with it, opened up the metal pieces holding the greenery in, substituted greenery from our farm that my husband helped me find, put back in the decorations from last year’s wreath, and it came out looking so much better that what was available this year:

I then turned my attention to Christmas apparel. I remade a sweatshirt for myself from a too big sweatshirt that was given me and discarded red sweatshirt in my daughter’s bag of stuff to get rid of. It came out like this:

I then went to the thrift shop and purchase a black men’s sweatshirt, a red fleece men’s shirt with a snowman on it, and a 24 month dress that was fur trimmed. When I came home, I printed out a picture of the grinch and used it as a pattern to cut out the pieces from scraps of fabric I had, used fusible webbing to iron it on to a sweatshirt, and then machine appliqued it on. It turned out like this:

The large red fleece men’s shirt was to make a shirt for my college-age daughter. I used a nice fitting shirt that she had in the discard pile as a pattern to reduce the sides of the shirt, moved up the sleeves (a slight gather around the sleeve opening helps to fit it in), and used fur from the toddler dress to add trim to the sleeves (after trying it on her for sleeve length when she came home for Thanksgiving.) It turned out like this: 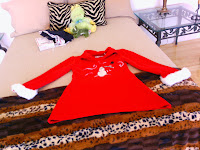 It looked great with her black pants, boots and Santa hat that I sent back to college with her. It was time to get rid of the last of the Thanksgiving leftovers. What I had left was some sweet potatoes, a jelled cranberry/strawberry salad and some copper pennies (marinated carrots). So I put the sweet potatoes in the food processor, ground them up, added yeast, flour, couple of tablespoons of peanut oil, salt, and a little milk to turn it into a loaf of bread and a few sweet potato biscuits. I just added flour a little at a time until it felt like bread dough. For the cranberry/strawberry salad, I added it to the food processor (not even bothering to wash it in between) and added the rest of the ingredients I would have added to zucchini bread (minus the zucchini and spices)and poured it into my sprayed bundt cake pan to make breakfast on the go for the week. For the copper pennies (which I had already used a portion of to make gingered carrots with rice, just adding rice and ginger and cooking with some soy sauce), I put them in the crockpot with two cups of rice, four cups of water, a package of ground venison, some cayenne pepper and some salt to eat for dinner with some sweet potato biscuits. Waste not, want not.