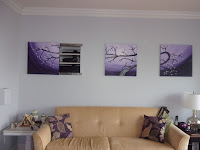 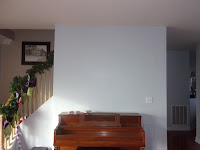 I realized as I was going to show yet another person our home theater system that we put in this summer that I did not include it in the blog.  It solved so many problems for us.  We got rid of those ugly cables, we added a sound system and imbedded the speakers into the wall (which also brought back the ability to listen to music), and we focused the screen area in a place that can be seen by anyone in the kitchen, dining room or living area.  While we don’t watch TV much and don’t subscribe to cable, we like to watch occasional movies and youtube videos and love being able to put it on a big screen.  While we were putting in the floors and had places to run the cables readily available, we went ahead and added the home theater.  Because the hole in the wall need to be off center (and I need a symmetrical layout for peace), we had to problem solve for that and came up with painting a triptych and putting one of the paintings on drawer sliders to cover the hole.

The other side of the wall is our pantry, and since we still had temporary shelving in there, we decided to go ahead and build our pantry shelves to coincide and accommodate the stereo equipment.  You will see a painted screen made from scrap lumber and a roll of screen we already had is covering the equipment to allow it to breathe, but not be seen.  I mean, the whole point was to get rid of the wires, right? 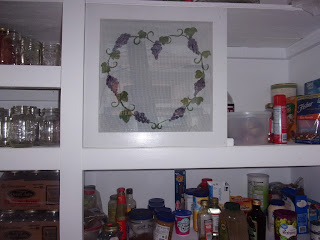 The other thing my husband did that we love, is when he was putting in the electrical for the surround sound, he put in a switch to turn all the equipment off at once, including the sound piece (subwoofer?) on the other side of the room.  Since we are trying to go off grid, we want to make sure there is no wasted electricity.

How to Launch a Duck House Without Getting Wet