Happy New Year from Powell Acres!  We are starting off the new year right with our goals for the new year encompassing their own Pinterest board so we can try to stay on track.  You can see them HERE.    A small list at this time which I am sure will grow. 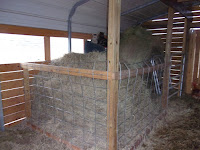 The first thing we had to do this year was insure that our cattle had enough to eat.  We wanted to find hay that was grown without chemicals, so we bought some organic hay from the Cohen Farm.  We were unsure of our ability to handle the large round bales, as we don’t have the equipment.  However, we managed to move them by doing some rolling, then by putting a tie down band around one and moving it the last little bit into place in the calf barn by pulling it with the truck.  We had to unscrew one side of the stall to get the hay bales in there, then screw it back.  We placed it next to the stall side (cattle panel) and removed the mesh so the cattle could eat it from there.  In this way, we were able to avoid buying a hay ring, and able to keep it inside out of the elements.  We were only able to buy two bales as this was as much as we could transport and store.  They weigh about 1200 pounds each and are 4′ x 6′. 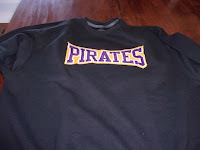 Another thing we accomplished in the new year, was a new pirate sweatshirt for my husband.  I had bought a Pirate sweatshirt some years ago for $.50 at a yard sale and between the collar coming apart and the tractor oil on the sleeve, it was time for it to go.  So I bought a new sweatshirt ($5.64) and cut out the old “Pirates” logo from the other shirt and appliqued it to the new one.   I used fusible webbing to hold it into place while I did the sewing. 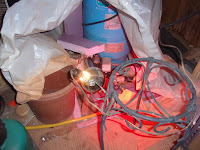 It has been really cold here and we have learned new tricks in how to deal with it this year.  The first one is using to heat lamp that we use for chicks to heat up the pipes at the well to thaw out the frozen spots when we lose water.  We have also put in pink foam insulation around the base of the water pump to keep it from freezing in the first place. 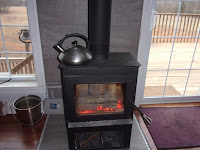 Another thing we have learned in dealing with the cold is now that we have a woodstove with a tea kettle full of hot water on it all the time, one good use for it is using it on the stock tank to thaw out the ice so the cattle have somewhere to drink.  Works like a charm.  We also like to use it to put in our percolator for quick coffee in the mornings, and for a quick cup of tea during the day.