Life is so good!  We love our little farm!  Even when it is cold out, there are things to do.  We are trying to add to the fences, so we have had to clear underbrush to the old fences to make sure what shape they are in and shore them up where necessary (thanks to our neighbors who will let us connect to their fence). As most of the underbrush was too small to do much with, we ended up with a burn pile.  We let the pile sit for a few weeks to dry out, then it was ready to burn.  The snow and wet ground provided us with the perfect safe conditions to burn in.  The snow, however, was not good for our solar panels.  We discovered that the snow pretty much blocked their ability to create power for us.  For the few days we had it, our batteries were going lower.  Thankfully, we conserved their use and never went below 68%.  We also had cloudy conditions during that time.

If you read back in June (at least that’s when I think I posted it), we worked on a woodland gazebo for our anniversary in May made with a grain bin top and some cedar poles we had.  We are intending to do further work on it with cement in the bottom and windows to make it look like one on my landscape pinterest page (you can get there by clicking the pinterest button on this page).  As it is an extra, however, we have decided that we will only be working on it one day a year, which happens to be our anniversary.

One thing I like to do in the winter is read books that will motivate and inspire me.  One of my recent finds was The Good Life Lab by Wendy Tremayne.  I really enjoyed the book.  One of the things I picked up from it was buying green coffee beans and roasting your own in a popcorn popper.  I was not able to find a used popcorn popper around me that met the requirement of having the fan on the sides of the inside instead of the bottom, so I ended up buying a Nostalgia Popcorn popper from Amazon.com for $19.99.  I bought five pounds of green coffee beans from Ebay.  When they arrived, it seemed odd that they were smaller than what I was used to.  I had no idea that they would expand during the roasting process.  I used the eight minutes that Wendy mentioned in her book, but I think we will try one less minute next time.  Other people online seem to use as low as 5 minutes.  We shall see.  At any rate, the beans turned out looking good, but we are thinking of cutting down on the time because they have a tiny bitter aftertaste that we might be able to get rid of.

The other thing we are doing is going to a Mardi Gras celebration.  I volunteered to make a King Cake.  Since it is made like yeast bread and I was making some sourdough bread anyway,  I just worked some sugar and cloves into one loaf’s worth of dough and rolled it flat, put in a cream cheese filling, wrapped it up and shaped it into a circle on a pizza stone, and let it rise over night.  After baking, I glazed it with green, yellow and purple glaze.  Then, I printed out a pattern from the internet for a mask, enlarged it a bit for an adult (it seemed to be child sized), cut it out of two paper plates for my husband and I, painted them, added some glitter, chopstick handles and some chicken feathers.  This really only took about 20 minutes.  What a fun thing to do on a Saturday!  Laissez les bons temps rouler! 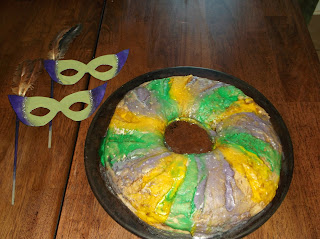