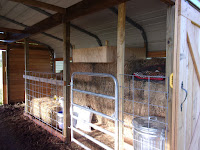 Oh my goodness!  My camera died so I couldn’t take any pictures.  Then I had to wait for Mother’s Day to see what I got, then the camera  I got took blurry pictures, so last night we went and bought a Kodak Pixpro FZ53 so I could continue on.  Anyway, so much has happened.  First of all, we decided that a well running woodshop is essential to our farm, so the hay had to come out of the barn.  In order for that to happen, it needed somewhere to go.  Since it was always our intention to put it in the calf barn, we had to hurry up and created a stall to put it in, so the cattle would not eat it, even though they had plenty of fresh pasture to eat, as we leave the barn open for them in case of heat or inclement weather.  So, we bought some cattle panels and some 2 x 4’s and had a stall created in no time on a Saturday.  It turned out pretty well. 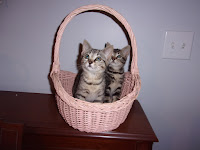 Next, we decided we needed to move the cattle feed out there (which we have pretty much quit giving the cattle since they have great pasture right now.)  So we moved it out with half of it being in a trash can.  We decided we need rodent control out there, and one of our neighbor’s cats had kittens with the dad being a feral cat, so we felt they would be good mousers.  So we collected a pair of kittens (brother and sister to be spayed and neutered).  So far, they haven’t moved out of our house (they are too little and cute).  Meet Arthur and Guinevere.  We are trying to figure out the right timing to move them out.  We got a pair because we didn’t want them to be lonesome out there away from the house.  Someone recently told us we have already spoiled them from staying out at the barn, but my husband thinks they will stay there if they get used to being fed there, so we will see.

Then there were organizing pieces to be made for the workshop.  I was trying to design the pieces based on materials we already had.  Since we had our daughter’s wedding here and had made tables for the reception and a dance floor, we had plenty of materials.  After seeing how my husband likes to store things, and knowing for me that I wanted the workshop to be more organized as well as have each thing have a place to live so it’s easy to put back, I designed spaces for the hand power tools, the screws and nails, the hanging things (like electrical wiring), and some deep shelves for some of the larger things.  Since I like to build and have more time at home, I think I am actually using the workshop more than he is.  I designed it, cut out most of the pieces, and my husband helped put it together and cut out the larger pieces with the Skilsaw.  (Why I am fine with using the nailgun and not the Skilsaw, I don’t know, especially when I am fine using the radial arm saw.  Maybe it’s that non-stationary blade?)

The nail and screw racks were made of 2 x 4’s with plenty of small scraps, the hanging racks are mostly 2 x 4’s with hooks, and the peg board was doubled to two pieces.  We did have to buy the hooks for the hanging things and one piece of peg board.  Luckily, we had all the pegboard pieces as years ago I bought a whole box of them for $2 at a yard sale.  The screws and nails are housed in clear plastic peanut butter jars we have been saving and plan to organize them by length.  It is still a work in progress.  During the middle of the project, we hired my son’s girlfriend, Angela, to come and help us organize some things, which was great.  It had the added bonus of a neutral party to get my husband to part with some old nails, screws and other rusty stuff that he has been hauling from house to house (for our entire marriage of 36 years) because they used to belong to his grandfather.  We still have some of his grandfather’s things as we kept the useful stuff, of course. 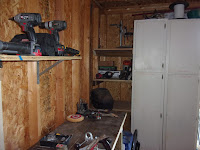 The workshop is still a work in progress, as I have not finished putting everything away, as you can see by all the stuff on the workbench.  We made some shelving in the corner using scrap boards for cleats and plywood for shelves.  We still will be making a lumber rack for the other wall as well.  The lighting has been decided on to be 12vdc using a battery and a solar trickel charger for the power, since it has worked so well in the calf barn and so we won’t further tax our photovoltaic system.  Stay tuned.

In the meantime, our meat birds have been growing and doing fine.  After 2.5 weeks, we removed the brooder, and today we decided to open the door during the day.  We are probably playing with fire due to not having a chicken door so they can escape daytime predators.  I will work on that today.  We found that even moving the chicken tractor daily (John pulls with a rope and I push from behind which makes it easy to move on the skids), it is too soiled by the end of the day.  Since he is not here during the day, we are hoping letting them out in the pasture will do the trick and clear more cow pies so the cattle will more fully utilize the pasture. 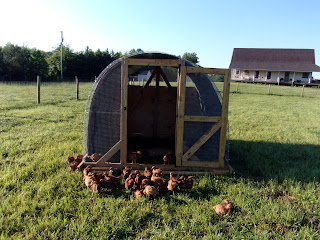