Busy times.  (Seems like I am always saying that, lol.)  We finished our new shed.  We ended up spending a little over $300 for metal roofing and screws, which is a lot cheaper than the materials for a whole new shed and gained a shed that is 12′ x 20′.  It solves a lot of problems with housing some of our tools and may even provide us with some wood storage that is out of the weather.  We have a greenhouse next to the house, but still end up growing most of our small plants inside due to the fact that we already heat that area, and didn’t want to add extra expense or work to heat another area. We chose not to get enough panels that go all the way to the ground, as we did not think they would add value in proportion to the money spent since our main objective was just to keep the rain off of our tools.

As we were getting ready to harvest our sweet potatoes, we decided to clear the field by first taking up the vines.  We tried both our pigs and our cattle to see if they would like to eat the vines, and the cattle consumed it more thoroughly, so we ended up bringing them about 5 truckloads.  The pigs acted like they were going to eat it and really didn’t, but the cattle ate the leaves, vine and all.

In our preparations for winter, we decided to try insulating our fig trees with leaves this year to see if it would prevent them from dying back to the ground next year.  We love figs, and we would like to get more of them.  We had to go rake leaves at a neighbor’s house, as none of the trees we planted are big enough to produce enough leaves.  We used fencing that we had laying around to created areas around the trees to contain the leaves.  One of the pieces of fencing had holes in it that were a bit too big, so we added some bird netting that we had.  Zip ties held both our fencing and netting together.  For the larger trees, we put rebar in the ground to hold the circle shape of the fencing.

Our newly planted ginger and turmeric also got a layer of leaves to insulate them for the winter.  The horse trough we planted them in worked well to contain the leaves (as was planned.)

I have been working on turning an unused space into our library (well, it was being used to drop off junk that we didn’t know where else to put – but I want to create a better space to organize said junk.)  I was quite proud of myself for building the 16 feet of bookshelves myself (with input from my husband, of course).

While I was priming these, I also primed the last of the windows that were bare wood, as well as repainted the gold wood on a chair to white so I could incorporate it into another room.

After I finished the shelves and painting, I also decided I needed a zebra hide rug for that space, so I painted some fabric I already had, primer coats on both sides, followed by stripes projected onto the fabric and painted with acrylic paint, followed by two coats of polycrylic to preserve it while being stepped on.  I cut it out last, and was very pleased with the floor cloth I ended up with.

To furnish the room, I found a drum table from Amazon Marketplace for $50 which was just what I had envisioned, along with two wingback chairs for $25 each that I am working on slipcovers for.  They were plaid when we bought them, and I wanted them to be charcoal gray to go with the zebra hide rug.  I spent $60 on fabric to get this accomplished.  $110 for two wingback chairs that are made very well (Hickory Tavern) in the color of my choice is money well spent in my opinion.  I also loved that they had straight legs as I am going for a British Colonial style decor.

I am quite pleased with how the room is turning out, but there is still work to do.  I will update with a video when I finish all the details. 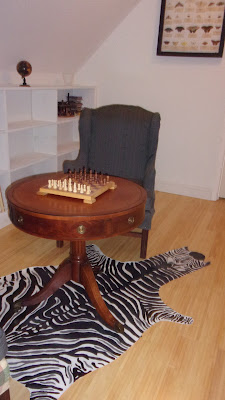