We are continuing to work on the calf barn, but have not progressed a lot due to illnesses and a hurricane (working only on weekends).  However, we are making progress.  The next part of the progress was to put in the posts necessary to finishing both ends of the calf barn, as well as where we want to put in stall walls.  The overall plan for the calf barn is to have three stalls, one kitchen/storage area, and a larger area for storing hay.  We took about 4 hours to put in some posts this past weekend (our viruses are making us get tired out pretty easily), and a short time the previous weekend putting in cement to dry.  I felt that I needed to show details on this step, as it doesn’t seem to be in the progress pictures of the Mulligan’s Run barn that this is patterned after.  I did get a helpful email from the owner, however, to give me a direction to go in.  We used the 12″ auger on our tractor to dig some holes that are 12″ deep.  We then mixed concrete and poured it into the holes (seven holes in all).  Despite having it blocked off, the Black Angus steer that we have in that pasture managed to get into it as it was getting close to being cured and put their hooves in.  As we were keeping a check on it, we managed to step in with our muck boots on and re-flatten it while it was still malleable.  They did not mess them up again, thank goodness. 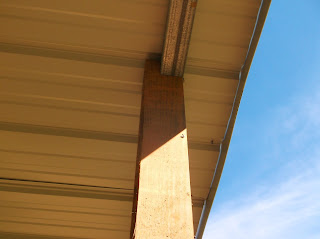 Once the concrete dried (we waited until the next weekend), We then worked on the posts to be fitted to the top by first putting the 4 x 4 up on the outside of the carport with it’s base on the outside of the concrete, leveling it in one direction, and drawing a line at the carport roofline.  Since our roof is corrugated, we then made a second line 1/2″ down, and cut on that line.  Once that was done, we put the post up where it was to go, leveled it, and drew a line where we wanted to notch it out about 2″ so it would fit snugly on the metal carport supports.  My husband used a circular saw, cut the line, and then cut a line about every 1/8″ so he could then hit it with a hammer and get the rest out with a chisel.  Once we got that fitted and leveled, we drew a line straight down in the middle of the metal support and the middle of the 4 x 4 post, as well as drew around the bottom of the 4 x 4 onto the concrete (so we could line them up again), and took down the post.  We then position the post base in the square we had drawn, and using a spike, tapped it where the of the post base was to mark it.

We removed the base and used a hammer drill to make the 1/2″ hole for the redhead sleeve in the concrete.  We used a piece of tube and our air compressor to blow the extra dust out of the hole so we would get a good fit. We put down the post base and hammered in the redhead, then tightened it with a socket and driver to secure it in the concrete.  We then put the post in and drilled two holes through the top and into the metal carport supports so we could use a carriage bolt to secure the two pieces together.  We put the post bases so that the sides went to the sides and not towards the front of the barn where we would be putting wood.  We also secured them to the posts with joist hangers.  Then we repeated this procedure with the other outside posts.

In addition to working on the calf barn, the hurricane came in and took out a day with rain, while giving us needed rest, and filling our pond so nicely with water just in time for our daughter’s wedding.  The water rushing through the spillway did manage to kill some of our young fish, however.

For the wedding progress, we have sent out invitations, we have added a web page for her Lord of the Rings wedding (see tabs), we have made progress on costumes, planted flowers, secured a sound system (we are using the Ion Tailgater PA system – I think our neighbors will all hear the wedding.)  Life is good, but busy.