OH MY GOODNESS!!!!  I was one scared cow mama today.  You see I have two Black Angus steer that are about 13 months old.  AND I have five Brown Swiss bottle calves that range in age from 8 weeks to 5 weeks.  I could not find anything online that speaks to this situation of turning the calves out (with all males), so I decided I was just going to have to go with my gut.  In order to wean some calves and not the others, I knew I would need to separate them somehow, so I decided to get them used to the  big pasture (instead of our front yard).  For the last two weeks, I have been feeding the calves some grain in buckets right next to the fence between the yard and the pasture, and feeding the Black Angus just on the other side of the fence at the same time.  I figured they could start getting used to each other this way.  Then last night, after feeding them all from their buckets, my husband and I opened the gate and invited the small calves (except for the youngest) into the pasture with the big steer to see how they would do.  With my husband and I out there, there was just a lot of sniffing, but the calves got scared and mooed at the gate to get out of there, so we took them out.

This morning, I fed the Brown Swiss calves their two bottles and decided to try them in the fence 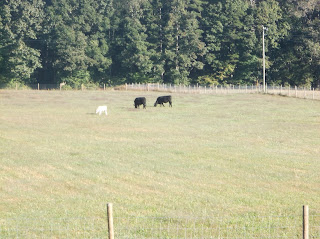 again (except for the little one who gets run away from his bottle and needed feeding).  So I got them all in the pasture.  The Black Angus came up and did their sniffing and things calmed down.  I then led the calves down the fence and introduced them to the water tank, so they would know where to get water.  Figuring they needed some time without me to get acquainted, I went inside and watched anxiously from the window.  It was so funny how the two Black Angus seemed to spend a little anxious time around the calves then came back together and I swear they looked like they were whispering in each other’s ears.  Then, they took a run at the little calves and one of them jumped up in the air and bucked.  I WAS SO SCARED FOR THE CALVES THAT I WAS READY TO GO RESCUE THEM!!  However, after a few minutes of this “territorial threat display” (any Avatar fans out there?) they seemed to calm down and just start eating grass.  Then the calves calmed down and started eating grass also.  I’m sure it was only minutes, but it seemed like it was going in slow motion to me.

Now that I have that situation solved for now, I have one calf inside the fence that seems to not know what to do with himself with all his buddies on the other side of the fence.  To be fair though, this calf spent a lot of time by himself even when the calves were in the front yard with him, mostly because he still naps a lot and the other calves go out to forage.  I will watch him and just keep going with my gut.  I will invite the other calves back in for feeding tonight, so stay tuned.  I usually don’t have any problems getting them to come when I yell, “C’mon calves” and hold up a bottle.  Stay tuned. . .