Skip to content
October 14, 2016
Day Two of merging the herd/Day One of weaning. 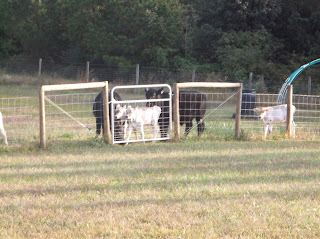 Yesterday, I left the calves in the fence with the older steer until it was time for their next bottle which was about 6:00.  At that time, my husband got home and we made bottles and took them to the fence.  We had no trouble whatsoever of getting the calves to come to the gate and out to get their bottles.  We took them to the pen (their usual feeding place) where their bottle holder is and fed them all their bottles.  The calves were left in for the rest of the night, partially because we felt bad for the poor young calf that followed them back and forth along the fence all day.  I ended up putting a bucket of water alongside the fence where the water tank was so the youngest calf could go drink when his friends were.

This morning I decided it would be day one of weaning.  Prior to this time I had been giving all the calves two bottles in the morning, and one in the evening.  This week I planned to give them one bottle in the morning and one in the evening, except for the youngest who will continue to get all of his.  My husband has to leave for work, therefore the morning feeding is on me.  So I fixed all the bottles, which I carry in a square 5 gallon bucket, and took them all to the pen.  The feeding frenzy was on.  After they finished the bottles, I gathered the empties in a hurry while they were still in frenzy mode, and led them all to the pasture.  I let all the calves in the pasture except for the youngest.  I then went inside to observe through the window how the Black Angus were going to handle today.  One thing I learned is that cows seems to sniff each others behinds just like dogs do.  At first, the Black Angus were anxious again, though not as much as yesterday.  There were a few scary moments like when one of the steer rared up like he was going to land on a calf, but the calf quickly got out of the way.  It was so interesting to watch as one of our border collies (Phoenix), seemed to run over to the fence and give the Black Angus a talking to every time they did some scary move toward the calves.  The big Black Angus appeared to pay attention.  Then Phoenix would trot back about 20 feet away and sit on his haunches like he was watching television.  Our other border collie (his brother) Hercules, just kind of laid back and observed the whole thing.  He was definitely not in the alert status that Phoenix was.

There was more disturbance when I came out with the youngest calf’s second bottle, when all the other calves complained loudly and went over to the gate (smart little things).  When I finished and went inside, things calmed down again.  It was so funny how one of the calves went over and pushed on the gate, then mooed to the Black Angus steer, got out of the way, and the two Black Angus came over and pushed on the gate.  I am sure if they wanted to push the gate open, it would have been no trouble to break through that chain.  Thankfully, they lost interest after a few minutes.