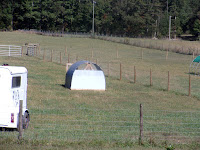 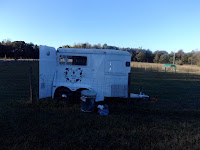 Not having enough rain necessitated running the cattle around the yard.  At first we just made a path from the front pasture to the back so they could get to the growing area.  It still delayed rain except for a few sprinkles here and there, and the cattle had soon eaten up the forage in that area.  Then we extended the electric fence into the backyard and other garden (aka, the chicken garden used for growing chicken food) so they could find more to eat.  I learned that cattle like to eat mums.  Who knew?  While they were out of the front pasture, I finished painting the logo on the horse trailer and sanded and painted the rust spots out so it will last for us for a while.  Now it is all ready to train our steer to eat in the back of it, getting ready for his appointment at the processor.  Additionally, I finally got around to painting the plywood on the back of the chicken tractor to make it last longer. 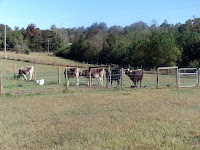 When the cattle finished eating what there was to eat and it was time to move them back to the front pasture, I was very proud of myself for getting them all to the front pasture together.  They do have a mind of their own and they do not always hang out together, so I had to gather them from two different places and hop electric wires to avoid getting jostled. 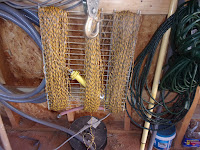 After getting them back into the front pasture, I removed the temporary electric fence that my husband had put up and fixed it for storage.  He told me that the wires get tangled when I just loop them, so he asked me to please wind them around something when I picked them up.  I looked around and found a small piece of wire shelving that was not in use and looked like the perfect instrument to wind up three different wires.  It was wide enough to allow me to wind two wires separately while I was headed down the fence line, and the last wire in the middle, so it was perfect. 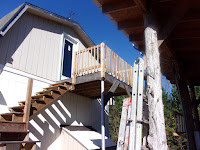 Another project I had been wanting to do was to use some partial deck rails to finish up the deck by the barn loft.  I had already taken them apart.  When they were laying in a pile, they were just junk, but when put to use in a good way they are now useful.  My husband has been such a good teacher when it comes to building projects that while I am used to doing them with him and him usually taking the lead, when I was doing this by myself, his voice was with me every step of the way reminding me how to do it.

Last but not least, we have been making progress on installing our wood stove and can’t wait until we get to see the fire burning in it.  So far we have installed the box in the ceiling and leveled the stove pipe.  We had to move it over about 3 inches in order to line up with the opening left by the placement of the ceiling joists and keep the stove pipe level, but it wasn’t bad.  I will have to live with it not being in the exact center. . . 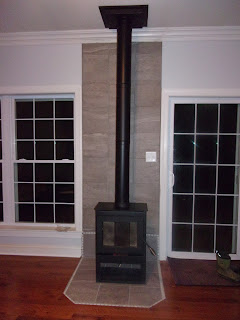