New chapter in our lives.  We have mostly turned the house over to Leah and Jake, with a few things left to finish and move over there.  We have been getting back to our poor neglected farm, but we have accomplished alot this last month on their house.  Mostly we were glad to welcome into the world our first grandchild, and pass all of the final inspections and get the Certificate of Occupancy, so he could have his first home. 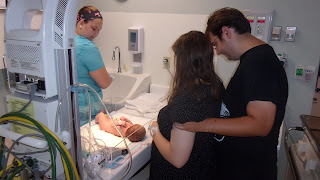 Our daughter credits painting the polyurethane on the floor of the baby’s room with bringing on labor.  I then used the palm sander to sand the master bedroom, followed by polyurethane.

In order to pass our plumbing and mechanical finals, we had to get the mini split running.  After we installed it, we got a professional to check the lines for leaks and put in the refrigerant.  It was so good to see it working as a source of heat and cool.  We also had to install the kitchen sink.  We used the old cast iron sink that was in the house and undermounted it under butcher block countertop that we had stained gray and added a few coats of polyurethane that were sanded in between.

We had to get the bath tub water tight, which meant finishing up the tiling around the tub.  It turned out beautiful.  Just some trimming left to do in the bathroom.

One of the things we were flagged on for the plumbing final was that we did not have access to the laundry area studor vent.  Apparently you are supposed to check them occasionally and change the vent if needed.  I used old progress pictures to find it, cut out a hole and put a piece of window screen we had (painted white) and bought a small frame for about a dollar to fix it.  We were also told we had to have a locking door on the bathroom.  The door cost $15 from the restore, but we paid $21 for the knob.

Some of the finishing work including painting the bedroom furniture in gray and white.  This old French provincial dresser that we found for a bargain of $35 turned out really nice.  It had one piece of drawer trim broken off, which I replaced with a small dowel I found at Hobby Lobby for under fifty cents.  Here it is clamped down while the glue dries.

One of the final things the building inspector requested was the house numbers.  We found this metal tray at a thrift store for $2.87 that I loved the shape of.  I then painted it and the house numbers on it and hung it with a command strip.  I have been warned that the command strip might not last long, but we will see. 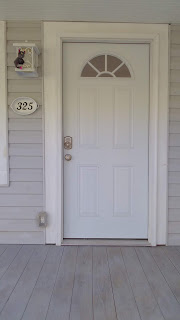